Sugar Substitutes: Which Ones Are Safe and How to Avoid Harmful Ones? 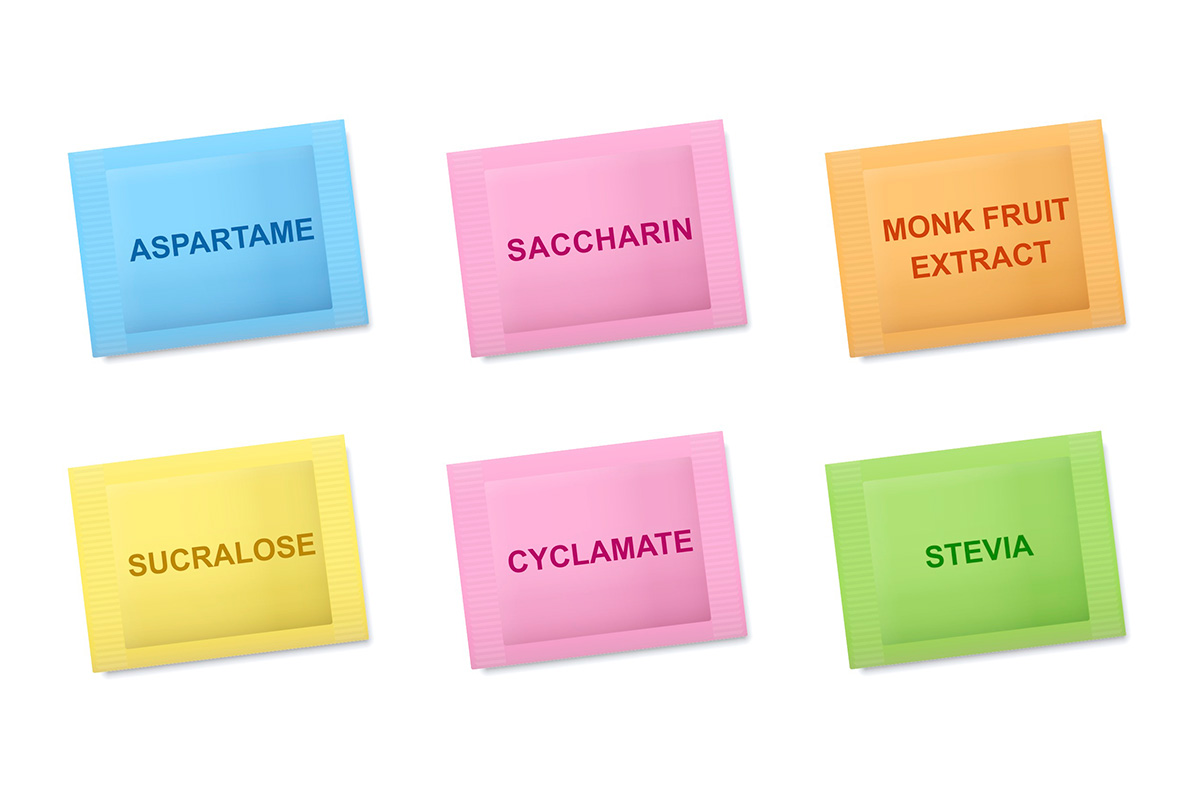 According to the USDA, the average American consumes over 7 tablespoons of added sugars per day. Seven table spoons! Let that sink in…Excess sugar intake is linked to higher calorie intake and lower quality diet, which leads to an increased risk of serious medical conditions, including type 2 diabetes, obesity, heart disease, fatty liver, cancer, inflammation, acne and depression5. As people are looking for ways to cut sugar from their diet, it’s no surprise that they’re turning to sugar alcohols, rare sugars and non-nutritive sweeteners. And the options are endless! It can be confusing to know which sweetener is best for you, and which ones you should avoid, so we have broken down the good, the bad, and the ugly of the most common sweeteners.

What are non-nutritive sweeteners?

Sugar substitutes or non-nutritive sweeteners/artificial sweeteners are substances used instead of sugars to sweeten foods, beverages and other products. They are derived from herbs, plants, sugar, or chemically synthesized. They contain few or no calories or nutrients and tend to be much sweeter than sugar. Some sugar substitutes are not metabolized by the body, which means that they pass directly through the digestive tract1. Some examples of non- nutritive sweeteners are Aspartame (NutraSweet and Equal), Acesulfame-K (Sweet One), Saccharin (Sweet’N Low) and Sucralose (Splenda).

What are nutritive sweeteners?

Sugar alcohols are considered nutritive sweeteners because they contain some calories. On average, they supply 2 calories per gram (compared to 4 calories per gram of sugar). Common sugar alcohols that you’ve likely heard of are xylitol, erythritol, sorbitol and maltitol2. The term “sugar alcohol” is confusing because it’s neither sugar nor alcohol. Sugar alcohols are a type of carbohydrate and have a chemical structure that’s similar to sugar. Food manufacturers use sugar alcohols to sweeten their products while reducing calories. We’ve broken down each sweetener based on type, glycemic index (the lower the glycemic index (GI), the less impact there is on raising blood sugar and insulin levels) and have provided a guide with respect to which sweeteners are safest to consume, based on published research3.

Legend:
Green = Generally safe to consume in moderation, Red = Avoid, or minimize use

Stevia is derived from a plant native to South America. It’s been shown to help level off blood glucose. Many experts have speculated that because artificial sweeteners don’t activate the release of satiety hormones, they may lead people to overeat at their next meal. However, a study in the journal Appetite found that might not be true. The research showed that whether you were healthy and lean or obese, drinking a cup of tea sweetened with regular old sugar caused participants to eat over 300 calories more throughout the day than those who consumed stevia. What’s more, stevia actually helped minimize spikes in blood glucose and insulin levels after the meal (it has a glycemic index of 0!) Stevia is anywhere from 200-350x sweeter than sugar. Just keep an eye on the quantity you’re using as the acceptable daily intake established by the FDA is no more than 9 packets. Beware of brands that make stevia combined with dextrose (another word for sugar). Look for one without dextrose or alcohol such as Trader Joe’s organic stevia extract or Nu-naturals alcohol free liquid stevia: Amazon.com: Trader Joe’s ORGANIC Stevia Extract CALORIE FREE 1 OZ 630 Servings : Grocery & Gourmet Food, Amazon.com: NuNaturals Liquid Stevia, Sugar-Free Sweetener, Plant-Based Sugar Substitute, Zero Calorie, Unflavored-Alcohol Free, 2oz : Grocery & Gourmet Food4.

Luo Han Guo is also called monk fruit because of its historic cultivation by monks in China. It has been consumed for several hundred years, having been used as a sweetener and a traditional herbal remedy. It has not been well tested through research, however. This sweetener is about 200 times sweeter than sugar, so you’ll use less of it when adding it to food. This fruit is also full of antioxidants and vitamins, making it a better choice if you’re going with zero-calorie sweeteners. It also has a glycemic index of 0. Keep in mind that many monk fruit sweeteners also contain erythritol. If you’re looking for monk fruit extract, Now foods makes one: Amazon.com: NOW Foods, Certified Organic Monk Fruit Extract Powder, Zero Calorie Sweetener, Large Bottle for Serving Scoop, Certified Non-GMO, 0.7-Ounce : Grocery & Gourmet Food4.

Erythritol is also a sugar alcohol and is found naturally in many foods such as grapes, pears, melons and mushrooms. It doesn’t seem to cause the same digestive problems as other sugar alcohols as it’s found naturally in the foods above, that have been consumed by humans for thousands of years. It has no effects on blood sugar levels with a glycemic index of 0. It’s also about 70% as sweet as sugar and contains practically no calories. Additionally, erythritol is an antioxidant polyol so it helps reduce oxidative stress in the body by gathering free radicals4. You can check out this brand of organic erythritol: Amazon.com: Espure Organic Erythritol – USDA Certified & 100% Pure – Zero Calorie Sugar Substitute, Plant Based Sweetener; 8oz : Grocery & Gourmet Food.

Allulose is a naturally occurring sugar found in foods such as figs, raisins, wheat, maple syrup and molasses. It’s has ~70% of sweetness of sugar, but without some of sugar’s well-known downsides, and with only 10% of the calories of sucrose! Chemically, allulose is similar to fructose, which is found naturally in fruit. It’s not absorbed into the body, therefore it doesn’t count as part of your daily calorie intake. It’s also considered safe by the FDA and has no effect on insulin levels with a glycemic index of 0. The only cons are that it can be pricier than other sweeteners and, if consumed in large amounts, it may cause stomach discomfort such as gas, bloating and queasiness6, 7. If you’re looking for a good, clean brand of allulose check this one out: Amazon.com : Wholesome Sweeteners Allulose Zero Calorie Granulated Sweetener, No Glycemic Impact, Non GMO, Gluten Free & Vegan, 12 oz (Pack of 1) : Grocery & Gourmet Food.

Xylitol is a sugar alcohol you can find in chewing gums. It occurs naturally in strawberries, mushrooms and other fruits and vegetables, and is most commonly extracted from the pulp of a birch tree. Unlike real sugar, sugar alcohols don’t encourage cavity-causing bacteria. Many studies have found that xylitol can actually reduce the risk of cavities and dental decay that’s associated with high intakes of sugar, and other studies show that it may improve bone density. It has a low glycemic index (GI) of 12, meaning that it has very little effect on blood sugar. It also has similar sweetness to sugar with 40% fewer calories. Unfortunately, as with many sugar alcohols, it also has a low digestive tolerance, and can also cause laxative-like side effects in high doses4, 8, 9.

Sorbitol is considered a sugar alcohol. Sugar alcohols are only partially digested before they move through the digestive tract, therefore they can have a very negative impact on the gut microbiome. On a positive note, it has the added benefit of not causing tooth decay like sugar. Sorbitol is a naturally- occurring sugar alcohol which is found in many stone fruits and some berries. It isn’t zero calorie like other sugar alcohols (and has a low glycemic index of 4) but because it lacks sweetness (it’s 60% as sweet as sugar) and is not tolerated well by the digestive tract, you’ll end up needing more of it to achieve desired sweetness. In turn, that can lead to a greater risk of its laxative causing side effects. One study showed that long term sorbitol use altered the gut microbiota and led to glucose intolerance4, 10.

You probably know it as Splenda, the sweetener that’s “made from sugar, so it tastes like sugar”—but the final product is quite different. It is a whopping 600x sweeter than sugar! The processing tweaks a sucrose molecule just enough so that its shape still activates your sweetness- sensors, but your body can no longer break it down, making it “zero calorie.” It also doesn’t alert your body that you’re consuming a food; however, this shouldn’t be a problem when used to sweeten nutrient dense foods (which can provide your body with satiety signals), but it will be if you’re consuming a soft drink made up of potentially harmful additives. The Center for Science in the Public Interest just downgraded sucralose from “caution” to “avoid” because a newly published study from the Ramazzini Institute found that the chemical caused leukemia and related blood cancers in male mice. Although it has a glycemic index of 0, this artificial sweetener is not a good choice due to the above reasons4, 11, 13.

Maltitol is a sugar alcohol typically used to sweeten chocolates because it’s low- calorie. It has a glycemic index of 35 (not terrible). It’s also a plant-based sweetener but only has 90 percent of the sweetness of sugar. Unfortunately, studies in the European Journal of Clinical Nutrition and International Journal of Dentistry have associated maltitol consumption with stomach and abdominal pain, as well as excessive gas and bloating4, 12.

Acesulfame K is a synthetic sweetener, also 200x sweeter than sugar. It has been linked to cancer in rodent studies. Because it’s not too sweet and has a bitter taste, it’s almost always combined with sucralose when manufacturers use it as a sweetener. This way, they cancel out each other’s bitterness. Studies have found that artificial sweeteners like this one can cause glucose intolerance, which ultimately results in confused hormones and weight gain. Although it has a glycemic index of 0, it’s probably best to avoid this one4, 13.

Aspartame is an artificial sweetener 200x sweeter than sugar with a glycemic index of 0. In the past, it was typically used in many soft drinks, desserts, and yogurts to lower their calorie and sugar count, until there was public outcry over its possible dangers. People who have phenylketonuria (PKU), a rare genetic disorder, have a difficult time metabolizing phenylalanine, an amino acid component of aspartame. If you don’t have PKU, you won’t suffer from the same negative effects—that include brain damage and seizures—however, the Mayo Clinic advises that people avoid consuming this sweetener in high doses. This is because the sweetener can flood your brain with phenylalanine, causing feelings of anxiety and jitteriness4, 13, 14.

Saccharin is an artificial sweetener/ synthetic chemical that is structurally unlike any form of sugar our bodies can metabolize; however, it still activates our taste buds at very high levels (think 200-700 times the amount sucrose does!) It has a glycemic index of 0 meaning it has no effect on blood sugars. That said, The U.S. National Cancer Institute noted that one of its own studies had found “some evidence of an increased risk of bladder cancer” in heavy saccharin users, “particularly for those who heavily ingested the sweetener as a tabletop sweetener or through diet sodas.” And “heavy” only meant two or more 8-ounce servings of diet drinks daily, which we’ve known people to consume more of. Other studies, such as one published in Nature that found saccharin consumption in both mice and humans enhances the risk of glucose intolerance by altering our gut microbiome. Researchers found an increase in bad gut bacteria that have previously been associated with type 2 diabetes4, 15.